Перейти к основному содержанию
Уваров М.С. «I like the Service of the Lutherans...» (F.Tyutchev and Christianity)
(F.Tyutchev and Christianity)
He wouldn’t say in prayer weeping
Lament, when he confronts the closed door
“Please, let me in; Your face I’m seeking
I do believe; help my unbelief, o, Lord!”
One has to examine, which hour of the day we are experiencing in Christianity. But, unless the night has already descended, we will behold the wondrous and great things.
There is no middle ground between Christ and madness.

A great deal has been written about Fyodor Ivanovich Tyutchev’s religious worldview, but particularly striking is the wide variety of opinion as to what that worldview actually comprised. The controversy surrounds the poet’s beliefs centered upon what path a man must take in order to become spiritually mature. Tyutchev has variously been called a pantheist, a “Westerner”, an orthodox thinker, and even a “Platonist” — and each of these labels is to some degree deserved (in context, of course).

Tyutchev’s path as religious thinker bears some resemblance to the spiritual journey of the famous St. Augustine. Augustine, while perhaps not his archetype, too was a congenial soul. The path captured in Augustine’s “Confession” is relevant to many, if not most believers today, who have set their foot on the road to discovering their true self and path to spiritual maturity. The end of this journey, as understood by the Russian poet, can be gleaned from the few short quotes penned by him that serve as the epigraph to this paper.

There is another thing that Tyutchev and St. Augustine had in common: a universal and all-encompassing responsiveness. When mentioning for the first time the “universal responsiveness” of Pushkin’s genius, Dostoyevsky implied that this is, indeed, one hallmark of the Russian soul. From the Christian’s point of view, this sensitive responsiveness is what makes these two great thinkers so alike, despite the differences between Tyutchev and St. Augustine in historical chronology, geography, culture, and lifestyle.

So, why the comparison? Well, because it would seem to affirm the notion that confession itself is a core distinctive of Russian genius.

Is some ways that means a Russian poet is simultaneously both a prophet and confessor to his people. No doubt Tyutchev is an exemplar of this confessional culture, inherited from the traditions of Augustine’s “Confession” and from the panoply of Golden Age, Russian poets.

Here we shall recall the lines penned by Pushkin, “The old Derzhavin noticed us and gave his blessing before his demise”. It was another “old man”, Pushkin himself, who published the famous collection of twenty-four of Tyutchev’s poems in two issues of the magazine “Sovremennik” (“The Contemporary”) in 1836, shortly before his own death. Although the old man (Pushkin) was only four and a half years older than Tyutchev, it was evident that the baton of confession had been passed.

Leo Tolstoy recalled how in 1855, it took “Turgenev, Nekrasov &Co. great pains to talk me into reading Tyutchev. But once I read it, I was dumbfounded by the magnitude of his artistic talent”. Note that at the time Tyutchev had been in print already a quarter of a century. The privilege of this repeat “discovery” must be assigned to another “old man”, i. e. N. Nekrasov. In 1850 Nekrasov drew the attention of “Sovremennik” readers to the poems of the then 46-year-old Tyutchev, whom the former compared to the best specimens of Russian poetic genius.

Evidently, the arguments about Tyutchev’s religious quest must be stated with one obvious premise in mind. Despite the entire variety of meanings that can be singled out in Tyutchev’s poetry, the Orthodox (or more broadly — the common Christian) spirit of his works prevails over any superficial instances of pantheistic, ecumenistic, or other such nuances that may appear.

The poem I Like the Service of the Lutherans provides a vivid example. The view of Protestantism that was held by the Slavic cultures varied from decade to decade. But it is revealing that such Russian monarchs as Katherine the First, Katherine the Second, and Peter the Third, emerged from Protestant roots, only to become the Orthodox tsars of their day.

There are two things about Protestantism that make an Orthodox believer unhappy (doctrinal arguments aside). Firstly, it is an explicit disconnection from the national culture (arising from the interpretation of the apostle’s saying “no Gentile or Jew…”), and secondly, it is something that Tyutchev himself wrote about in October, 1834:

I like the Service of the Lutherans…
Their worship is austere, yet imposing
The hollow temples’ void so posing
Imparts its elevated stance.

Oh, don’t you see? You, ready for the road,
It is your last day when you can touch true faith
This faith has barely crossed the threshold
But look, her house is full of knaves

This faith has barely crossed the threshold
The door is but one inch away from closing
And yet, the hour has struck, pray ye to God,
It is your last chance, so waste it not.

Here implied is vintage Lutheranism, which has succeeded in preserving many early Church and Temple rituals throughout the ebbs and flows of history. Based on these almost confessional lines by Tyutchev, we can see why, from the Orthodox perspective, various Protestant denominations having lost these fundamentals cannot claim the knowledge of absolute truth. At the same time, Tyutchev’s verses pinpoint a common ground upon which Christian dialogue from different points of view may yet take place. Tyutchev, with Western tradition in mind and with understanding and tolerant appreciation of its ways, evoked a keen appreciation and sensitivity to these subtleties.

Tyutchev’s poem I like the Service of the Lutherans invited a firestorm of polarized interpretations. Some sincerely concluded that Tyutchev had all but ridiculed Protestantism, while others speculated that the poet preferred the Lutheran position to the Orthodox Predictably, between these two extreme views grew a divide of opinion leaning this way or that..

Evidently, one of the possible “decryptions” of Tyutchev’s poem can be reduced to this simple concept: that the spiritual condition of every unchurched person passionately seeking to faith is a picture of the condition in which the poet found himself at different times in his life. The spiritual quest on the edge, on the brink of faith — isn’t this the quintessence of the human condition both in Tyutchev’s years and in later times (i. e. in the twentieth century) the tragedies and ripples of which Tyutchev predicted, just as Dostoyevsky did? The search for the way, truth and life shines through the two famous quatrains closely related to Tyutchev’s reflections on the Lutheran’s pursuit of the faith heightened by the threat of its loss.

Tyutchev develops his own perspective on classic Lutheranism — just as Arseny Tarkovsky does in the imagery of his poems many decades later:

Just as Tarkovsky, for instance, examines Lutheranism “from the other side of the mirror”: From there he sees the most important thing: the search for the right way, when the hope is almost gone, when “God the prosecutor has taken everything away from me…”

The higher way and anticipated faith are the things that humankind may have lost in its quest for special truth, devoid of God and purpose.

It must be noted that over time the twentieth century Russian thinkers’ opinions of Protestantism evolved from flat-out intolerance to the possibility of mutual understanding. During the rule of Alexander the First, the Censorship Charter included the following provision: “Hereby is forbidden any act whereby one Christian church is condemned by the other under the pretext of protection or justification of the former. Such act is a violation of the union of love joining together all Christians by the same Spirit in Christ”. According to A. Khomyakov, “Protestantism rose from the depths of Catholicism and revived the hope that human beliefs can be based on a foundation higher than rationalism or legalism—that salvation and true renewal can be found in the spiritual change offered to humankind by its Creator. Invigorated and energized by Protestantism’s austere poetry that dignified the human personality and abounding in youthful dreams, Protestantism injected fresh blood into the overworked veins of flabby Latinism”.

I. Kiriyevsky compliments and clarifies Khomyakov’s idea, “as a social phenomenon, the Reformation promoted enlightenment among the Christian nations, rescuing them from Rome’s onerous intellectual oppression. This is the principal merit of Protestantism, which recovered for man his human dignity and won him the right to be an intelligent being”.

V. Solovyov made a great contribution to understanding of the Reformation’s true significance. He stressed that its key point was not “a national or political protest, but an exclusively moral protest on the part of the coerced, seeking such freedom and the rights granted to each individual spirit by its Creator. A decisive affirmation of the personal religious freedom and sovereignty of the personal conscience must be credited to Protestantism”.

But Tyutchev’s quest runs much deeper than Protestantism (Lutheranism.) According to B. Tarasov, in Tyutchev’s understanding, no healthy growth, balanced mind, and true viability of individual, society, or state is possible without faith in God. For it is faith that reconciles the “beginnings” and “ends” against all odds; and it is through faith that the deep longing for whatever meaning lingers after death is satisfied and the highest moral standards reinforced.

Spiritual foundations are reinforced when man finds his frail humanity illuminated by the brilliant light of eternity, unconditional virtue, and immutable intelligence. When abandoning God and our mystical origins, man forfeits his connection with the highest moral standard and path to true freedom; loses his ability to tell good from evil and becomes “possessed”, vainly roaming in search of an illusory immortality and true purpose for being.

Therefore, the theme “Tyutchev and Christianity” is not confined to the academic and theological realm. It operates in the higher plane of spiritual quest that rise above petty religious dissent and inter-denominational conflict and seeks the common ground of truth.

This is the driving force behind Tyutchev’s spiritual and moral pursuits. In his understanding, the inter-denominational dialogue was one of the highest manifestations and worthwhile endeavours of the human spirit.

For this reason, Tyutchev’s poetry is both non-denominational and deeply orthodox at the same time—as it manifests the highest exposition of spirituality, in which the Christian worldview finds its broader identity in modern civilisation.
Free to review and use, but not to reproduce without permission.
International Symposium “Man and Christian Worldview” 2005

Social and Anthropological Background for Addressing Xenophobia
Academic Science and Religion in Ethical and Pedagogical Context
Religious anthropology in the postmodern situation
Petersburg, Moscow, Rome: Intertwining Metropolitan Myth
Teleology as a method of historical cognition H.Rickert’s philosophy
Boswell's Wretched Register:Hypochondria and Confession In the Journals of Jjames Boswell
Leaving Paradise As The Condition of Consciousness: Hegel's Theory of Hominisation
F.H. Bradley on Self-realization as Relation to the Self and to Others
Postmodernism as the problem of metaphysics
Non-classical Paradigm of Interpretation 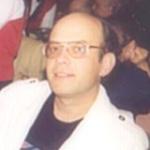